Italy is a peninsular in the Mediterranean Sea, with a coastline of more than 5,310 miles. Rocky, wooded cliffs are indented by an innumerable assortment of beaches and bays.

On the full distance of Liguria stretch the two Italian Rivieras with Genoa (Genova) midmost. To the west, almost an extension of the French Côte d’ Azur, is the Ponente as well as such celebrated seaside resorts as San Remo, Alassio and Varazze. The eastern (Levante) Riviera boasts Nervi, Portofino, Santa Margherita, Rapallo and Sestri Levante.

Other Italian beaches popular with foreign visitors are Forte dei Marmi, Viareggio, Castiglioncello, Porto Santo Stefano, Porto Ercole and the Island of Elba in Tuscany; Ostia – Lido of Rome (Roma), Fregene, Anzio, Nettuno in Lazio; Capri, Sorrento and the Island of Ischia, Positano, Amalfi and Maiori on the Gulf of Naples (Napoli) and Salerno; Sardinia; and from North to South along the Adriatic Coast: Grado, the Lido of Venice (Venezia), the Lido of Jesolo, Lignano Sabbiadoro and then the enchanting string of towns along the Coast of Romagna, among which Milano Maritima, Cervia, Rimini, Riccione and Cattolica stand out. On the coast of Apulia, one finds the Lido of Siponto on the Gulf of Manfredonia, the Gargano peninsula and the Tremiti Islands.

The Ligurian Sea Set in the blue

Villages fighting to find enough space, set like tiny jewels between the blue surface area of the sea and the luxuriant greenery of the mountains looming above them. Here, the buildings hanging boldly to the hillsides are painted in the richest colours. Silent alleys lead their way among the houses, bunched close together to make the best use of every square inch wrestled from an semi-wild nature. 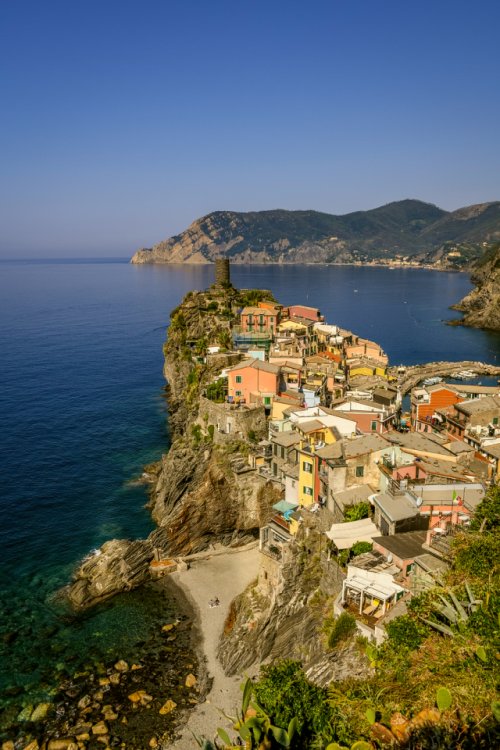 The towns and villages on the Ligurian Sea show themselves a little at a time, proud defenders of genuinely ancient traditions. They also offer unforgettable views: the splendid square in Portofino, the scene of thousands of high society encounters. The five villages of the Cinque Terre and the Via dell’amore, the path of love, that unites them, the profusion of flowers in Sanremo, and the thousands of little villages that, from the tops of the mountains, enjoy the peace and beauty of extraordinary views.

Monterosso al Mare: This village of The Cinque Terre is the largest of the five, and is probably your best bet when looking for a place to stay since it has the most hotels and restaurants. It also boasts some great beaches for sunbathing and swimming, as well as wine and artisan shops.

Monterosso has two large sandy beach areas, perfect for sunbathing and cooling off in the sparkling blue sea. Since this is the largest town, however, these beaches may tend to be overrun with tourists and locals alike in the hot summer months.

There are some beautiful pebble beaches along the coastline of Riomaggiore and Corniglia if you’re looking for something a little different from the everyday sandy beach variety.

Set in a broad flat valley with a long sandy beach and two sheltered bays, Sestri, as the locals call it, has something of a 1950s feel. This might have something to do with the striped umbrellas that dot the beach, the old-style refreshment kiosks, play areas and amusements along the waterfront and the meandering cycle paths.

The Tyrrhenian Sea Steeped in history 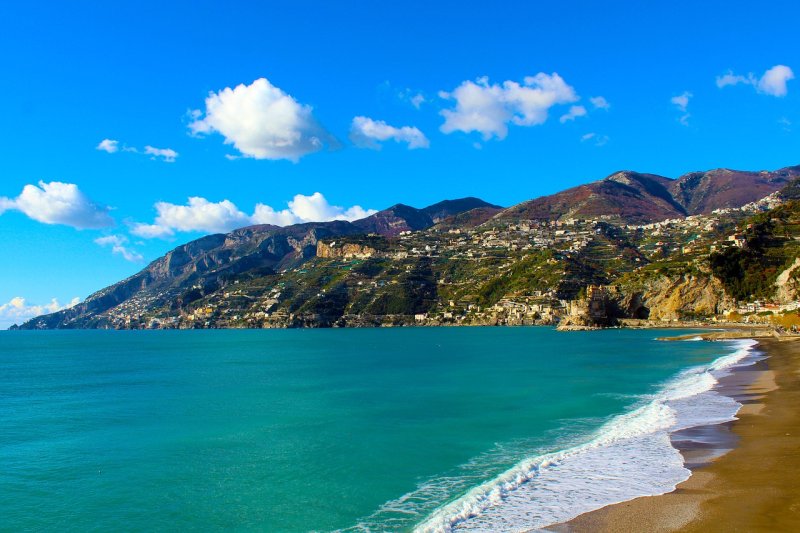 Long beaches of golden sand, ancient towns, sheer cliffs plunging into the sea. The Tyrrhenian is an endless succession of experiences and emotions linked by a single common denominator: the brilliant blue of the waters that marks the boundary between land and sea.

A journeying through history in which all are free to stop in the place nearest to their hearts: the sunny, well frequented beach resorts of Versilia with their colorful night life, the wild countryside of the Maremma, the historic coasts once home to the mysterious Etruscans, the celebrated Sorrento peninsula, the romantic Amalfi Coast or the suggestive, untamed coast of Calabria. Wherever you stop, there is a certainty: a stone’s throw from the foreshore a world of art and culture lies waiting to be explored.

Around the bend from Naples extends the amazingly attractive forty-three stretch of coast called the Amalfi Coast. From the glowing blue sea to the high slopes of lemon trees, to the multi-colored terraced houses, it’s certainly an ideal location for a laid back and relaxing travel experience.

Calabria has some of Italy’s wildest panoramas. Stay away from the overbuilt coast and you’ll generally have the place to yourself. Besides three vast national parks, ancient towns grow out of rugged hilltops, while amethyst waters wash Tropea’s beaches.

Finding out Cala Mariolu, a pebble seashore segmented by large limestone rocks on Sardinia’s east coast, takes some effort – but a majority of visitors say the attractive place is worth the effort. The waters that touch the shore are every hue of blue, and the tucked-away area seems like a concealed heaven.

Even though many guests say that this beach is absolutely amazing, some say that the amount of beachgoers can diminish its calmness. Numerous guests suggest hiring snorkeling equipment to utilize at a nearby, swimmable cove.

Showcasing spectacular cliffs as well as referred to as “Jewel of Calabria”, Tropea Beach is among the best beaches in the region. The good thing is that Tropea isn’t as commercialized as other regions in Italy, like Amalfi, so there is an excellent possibility you will likely have some tranquility here.

Visit Tropea town which is renowned for its clifftop historic center and church from the 12th century. For magnificent sea views, visit the Santa Maria dell’Isola Church.

A marvelous curve of wild, sunkissed beauty: more than any other area, the Ionian Sea offers a deeply close interaction with nature. Corners of unchanging beauty where the vivid colours of the vegetation interchange with the peculiar remains left by the many ancient peoples who, seduced by the landscape, put down their roots there: from the Phoenicians to the Greeks, and from the Normans to the Arabs.

Lido di Metaponto is among the best beaches on the Ionian Sea in Basilicata, Italy. Down the coastline, you will discover numerous breakwaters, which, however, usually are not noticeable from the shoreline. So this is an excellent location for young children. The central beach area is usually already stuffed in the high season. However if you stroll slightly to the side, and you’ll find a lot of free space.

A wreath of small tourist centers dominating an enchanted sea, where you can take pleasure in the relaxing rise and fall of the waves. Moving towards the interior, we find the primitive charm of a natural environment still partly unexplored: the extensive forests of the Pollino, the gentle slopes of the Sila and the jagged peaks of the Aspromonte, home to the last packs of wolves and the almost extinct Bonelli’s eagle.

Lido di Policoro is a popular beach in the Italian area of Basilicata. The central coastal area is loaded with sun lounge chairs. But, just a little to the south, you will find a green area with a stream It has a spacious parking lot. There is also a large free beach to the north.

A welcoming sea that deepens only very step by step, thus enabling everyone to feel self-assured in the water. Enormous extends of sand on which to relax. Brightly colored ranks of beach umbrellas that encourage encounters and friendships in their welcoming shade. Sociable beaches where mothers can devote themselves to reading their favorite novel and fathers can keep themselves in shape with a variety of sports while the kids have fun with their new playmates. Spellbound castles to be built together on the sand when the day is about to give way to the evening.

Jesolo has a 15km long beach. The very first beach facility was established at the end of the 19th century. Half an hour drive from Jesolo you will encounter Caorle, whose beach is split into ‘spiaggia di Ponente’ (1.2 km) and ‘spiaggia di Levante’ (1.7 km). The size of Caorle’s beach reaches 15 km along with the surrounding suburbs of Porto Santa Margherita, Lido Altanea and Duna Verde.

Romagna is the wonderland of the beach and suntan lovers. The coast is jam-packed with beach locations. Rimini, Riccione, Cattolica and Cesenatico are only some of the more well-known Adriatic beach places. The sea is not great here, but the variety of services (pools, water slides, gym, massages, sports lessons and so on) made these towns the Italy’s top beach resorts. Moreover discos, clubs and beach bars are many

The Adriatic is lined with an interminable series of truly wide beaches, where families with children can share the pleasures of a holiday together. A paradise of tranquillity that none the less offers some agreeable surprises: the glittering night life of the Riviera Romagnola, the evocative charm of the promontories of Conero and Gargano, and the rugged coastline of Puglia, which are among the most visited best beaches in italy.

When traveling abroad for your Italian vacation there are some tips that you should be sensible of. First of all you must acquaint yourself with all the regions you will be seeing. Study as much as practicable about the locations and towns you project on visiting. If you are picking out a holiday away the […]